ADDICTIONS ARE THE PITS…

A friend of mine has had a drinking problem for many years.  She can go for weeks without having a drink or thinking about it, and then suddenly, the desire for alcohol overrides everything else in her life and she then drinks in secret.  This behavior pattern, even though she is really good at hiding it, is destructive to herself, her husband and her children. It is also destructive to her ministry  as she carries so much guilt about this ‘hidden’ aspect of her life.  The freedom and joy of Christ which should be manifest in her life is overshadowed by unforgiveness and feelings of shame and disgust.

A few weeks ago she went out for supper with a friend and the following morning her son asked her why she had lied to him the night before.  She couldn’t even remember speaking to her son when she got back from supper much less lying to him.  He had asked her the night before whether she had been drinking and she had said no – he said it was so obvious when she came home, that she had indulged in a couple of glasses of wine as her whole personality and demeanor changed.

She spent that morning in prayer, reading the Bible and just meditating.  As she prayed she had a picture of a long road.  The road of life that she was on.  There was a see through wall going from the ground up to heaven, separating the road in one place, and Jesus’s feet rested on the top of the wall.  The frame of the wall was made from steel, painted red, and the wall itself was made from bullet proof, shatter proof clear glass.  She could look back through the wall, even hammer on the wall but there was no way that she was going to be able to go through the wall and nothing on the other side of the wall could get through to her. The road itself was above the earth so she couldn’t walk around the wall either!  Her past and her future were solidly divided. 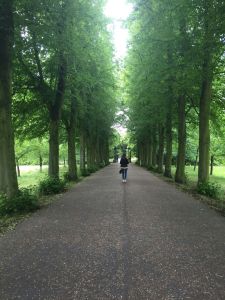 She said to Him “yes Lord, but I am constantly seeking forgiveness for the same thing over and over again and there is just no healing or freedom from this addiction.  He replied “I have not given you a spirit of fear but of power and love and self-control.” (2 Timothy 1:7). “I also want you to know that you do not need to be afraid; you will not suffer shame.  Do not fear disgrace; you will not be humiliated.  You will forget the shame of your youth”. (Isaiah 54:4)

As she reflected on God’s words and the picture she had been given she realized that she had to start trusting God, had to take Him at His word and He would enable her to break the chains of addiction that she was imprisoned in.  That “once we confess our sins, God is faithful and just to forgive us our sins and to cleanse us from all unrighteousness.” (1 John 1:9).

There is no way we can go back and undo what we have done but there is also no way that we can carry our pasts of shame and failure into our futures once God has forgiven us.  It is gone.  And, if there are consequences for what we have done, God will equip us to deal with them.  She said there was an incredible feeling of relief and her horror and shame about drinking and lying to her son became something she thanked God for. She was so thankful that her son had confronted her because it was the final nail in her coffin of lies and shame.  She has started to share her story of alcoholism with a few trusted people, is reading God’s word with a fresh understanding that she is a ‘new creation in God’, and her ministry has far more depth and thoughtfulness to it, she has become less judgmental of others and has gained a deeper understanding and empathy for  herself and others suffering from addictions.

She is learning to be compassionate and kind towards herself, to live every single moment to the fullest and to exercise an attitude of gratitude and thankfulness towards herself, God and those around her.  She is learning to look back through the glass wall without anger and shame and because of the blood shed on the cross for her, because Jesus was prepared to die for her, because she is a new creation she is positive about her today.

“For we are God’s masterpiece. He has created us anew in Christ Jesus, so we can do the good things he planned for us long ago.”  (Ephesians 2:10)

I am a child of God's. I am also a writer. Mother Teresa once said "I am a little pencil in the hand of a writing God who is sending a love letter to the world". My objective is to be one of God's love letters to the world. I can only achieve this through His grace at work in my life.
View all posts by Noelene →
This entry was posted in addictions, Life, Prayer and tagged addictions, God, grace, wholeness. Bookmark the permalink.