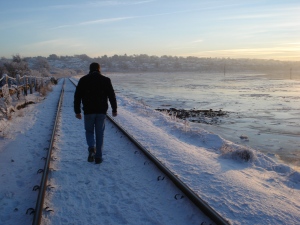 One of the most common words used in the English language must be the word WHY?

Why did this happen?  What purpose does it serve?

Most of us struggle with the question of ‘why does God allow bad things to happen to good people?”  Incredible that at the time of writing this, my then 12 year old daughter, came into my office and read me an essay she had written.  The title was “Why?” I listened in amazement as my child verbalized this age-old question.

Often, the answer to that question has nothing whatsoever to do with God.  It is to do with bad decisions a government or country has made, or wrong choices our parents made or the consequences of our own wrong doing.

I heard the following story the other day and it highlighted for me the verse “And we know that in all things God works for the good of those who love Him, who have been called according to His purpose”. (Romans 8:28)

There was a king who had a devoted servant.  This servant loved the Lord and was continually praising God for His goodness.  The king and the servant went hunting one day and a lion attacked the king.  The servant managed to fight the lion off but, alas, the king lost his index finger.  The lion had managed to bite it off!  The king was really upset and what made it worse was the fact that the servant told him he should be grateful to God for sparing his life.  All the king could think of was the pain and the fact that his finger was missing. He could not believe that his servant was praising God for this so he had the servant thrown into jail.  A few days later the king went hunting and was captured by a tribe who offered human sacrifices to their gods.  The king was bound and laid on an altar in preparation for the sacrificial ritual to begin when the tribe suddenly noticed that he had a finger missing.  This caused great consternation as it was forbidden to sacrifice anyone who was ‘incomplete’. They cut his cords and allowed him to go free.  When he finally made it back to his village, the first thing he did was to go straight to the jail and set his servant free.  He explained to the servant that if it had not been for the missing finger he would be dead. The servant then proceeded to give all thanks and glory to God!  The king listened for a little while and then posed this question, “If your God is so good and amazing WHY did He allow you to be thrown into jail?”  The servant replied, “Because, my king, if I had been hunting with you, I too would have been captured. And when they discovered that you had a part missing I would have been sacrificed in your stead!  Thank God I was in jail!”

We have no idea what the future holds and our time here on earth is very short compared to eternity! If we accept Jesus as our Saviour we will be spending eternity with God and the things that we experienced here on earth will fade into insignificance.

“Measure not God’s love and favour by your own feeling. The sun shines as clearly in the darkest day as it does in the brightest. The difference is not in the sun, but in some clouds which hinder the manifestation of the light thereof”.   Richard Sibbes

I am a child of God's. I am also a writer. Mother Teresa once said "I am a little pencil in the hand of a writing God who is sending a love letter to the world". My objective is to be one of God's love letters to the world. I can only achieve this through His grace at work in my life.
View all posts by Noelene →
This entry was posted in Blogging, God, Life and tagged Blogging, faith, God, hope, thankfulness. Bookmark the permalink.