On a recent trip to New York we visited Ground Zero – we also drove past the Engine 54, Ladder 4, Battalion 9 fire station. 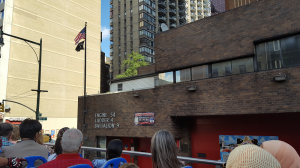 On the morning of 9/11 the entire shift of firemen on duty that day, fifteen men in all, lost their lives rescuing those trapped and injured in the Twin Towers horror.  These men were among the first to arrive at the World Trade Center – none of them made it back.

The first certified fatality on that day was a Franciscan friar and Catholic Priest, Mychal Judge. He also served as a chaplain to the New York City Fire department.

Along with the firemen from Ladder 4,  he was one of the first people on the scene that morning and after giving the last rites to a dying fireman on the street, he turned and went back into the lobby of the North Tower. He walked willingly into chaos, destruction and mayhem in order to help his fellow human beings.  He was killed by falling debris.

At his service Father Michael Duffy said the following:

“…he loved people and that showed and that makes all the difference. You can serve people but unless you love them, it’s not really ministry.”

{We, who are Believers, would do well to remember that – ‘you can serve people but unless you love them, it’s not really ministry’}

“He loved to bring Christ to people. He was the bridge between people and God and he loved to do that.”

He was waiting for his Firemen when they arrived in heaven. As Father Duffy said in the Eulogy “he was waiting for his Firemen in order to greet them with that big Irish smile.  He’s going to take them by the arm and the hand and say, “Welcome, I want to take to you to my Father”. And so he can continue doing in death what he couldn’t do in life.”

“The favors of the Lord are not exhausted. His mercies are not spent. Every morning, they are renewed. Great is his faithfulness. I will always trust in him.”  (Lamentations 3:22 & 23) 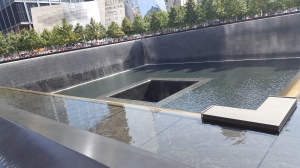 I am a child of God's. I am also a writer. Mother Teresa once said "I am a little pencil in the hand of a writing God who is sending a love letter to the world". My objective is to be one of God's love letters to the world. I can only achieve this through His grace at work in my life.
View all posts by Noelene →
This entry was posted in New York and tagged life. Bookmark the permalink.