HOW FALSE ARE YOU? 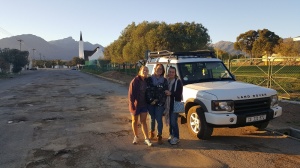 If I were to answer that question I would have to say “I can be very false at times!”

It was brought back to me just how false I can be the other day whilst driving my youngest daughter to school.  My car had to go in for a service so I had borrowed one of the work’s bakkies (pickup) for the day.  The work name and telephone number are pasted all over the bakkie and I remarked to my daughter how differently I behave when driving this bakkie because I am so aware that everyone can see the work name and logo and telephone number and I don’t want to give work a bad reputation because of my driving! I let the cars slip in before me, I smile and nod my head at other drivers – I don’t mutter, complain or glare at drivers who are driving erratically or who cut me off as I usually would.

I think my daughter wishes we could drive in the work bakkie more often as it is just so much more peaceful!

What is scary is just how false I can be.  Nothing has changed – it is still the same route, the same traffic but because I am driving a vehicle that can be recognised, my personality and behaviour changes because I am no longer anonymous.  How sad is that?

It is the same for many Christians – myself included.  When we think no-one is looking we often behave and think differently as opposed to when we go to church or are amongst other Believers – we then make sure we are on our best behaviour.  Early on in our marriage if my husband and I had had a fight, we wouldn’t talk to each other on the way to church but as soon as we slammed the car doors behind us in the church parking lot we were all smiles and friendly – towards others and to each other.  We could have won an Academy Awards trophy for our acting!

There was another occasion in my life when I realised just how false some people can be and how the majority of us do ‘judge a book by its cover’.  I used to drive a little Nissan – it was in the lower range of motor vehicles.  My husband had always wanted a Land Rover and one day he bought himself a four year old, second hand Land Rover Discovery.  It is one of the older versions of Land Rovers but it is big and very impressive looking.

The first time I drove it was to pick our girls up from school.  As I parked, I noticed the other moms looking at me and then realised that the wealthier mothers who had never ever greeted me, never mind looked at me before – suddenly acknowledged me with smiles.  I was exactly the same person that they had been seeing for months driving a little white Nissan, but now, because the vehicle I was driving was more ‘upper class’ they noticed me.  It got me thinking about how often we judge others by their appearances and their material possessions.

The following is a true story about judging someone on their looks.  There is a farmer in the Northern Cape who is a multi millionaire. He, however, always wears old clothes and never wears shoes.  He drove into Cape Town one day in his farm bakkie and parked outside a Premium car dealership. As he walked into the showroom the salesman took one look at him and then ignored him.  The farmer walked towards him and asked him how much one of the vehicles would cost? The salesman barely glanced at him and basically intimated that there was no way he would be able to afford one.  The farmer walked out the door and went next door to another Premium car dealership. As he walked through the door the salesman rushed towards him, shook his hand and asked what he could do for him.  The farmer drove past the first dealership in his brand new vehicle and waved at the salesman who had just lost out on a major commission deal because he judged on outside appearances.

I am a child of God's. I am also a writer. Mother Teresa once said "I am a little pencil in the hand of a writing God who is sending a love letter to the world". My objective is to be one of God's love letters to the world. I can only achieve this through His grace at work in my life.
View all posts by Noelene →
This entry was posted in Life, Promises and tagged grace, judgement, revelations. Bookmark the permalink.

1 Response to HOW FALSE ARE YOU?