HOW GREAT IS OUR GOD!

My sister and I were sitting on either side of his bed holding his hands as he took his last breath.  It was incredibly peaceful.

At the end of July my dad flew from Cape Town to Durban to spend some time with my sister Mary Ann, her husband Stephen, and their family. In mid-September we received a phone call to say that my dad had collapsed and had been admitted into hospital for observation.  We were advised to fly up to Durban to say goodbye to him.

They discovered that my dad’s heart was only functioning at 20%.  Stephen and Mary Ann brought my dad home and Mary Ann took a leave of absence from her work in order to nurse my dad.  He was semi bed-ridden and on oxygen permanently from then onwards.

God’s timing is impeccable – Stephen is a doctor and Mary Ann is a nursing sister – and he was brought home to be loved and cared for.  Had he still been in Cape Town we would not have been able to nurse him and care for him as they did and he would have spent his remaining weeks in a sick bay.

We flew up to Durban and spent a wonderful long weekend with him.

We promised to go back and spend Christmas with them all and after we left he told his doctor that she had to keep him alive till after Christmas because he was going to spend it with his family!

We arrived in Durban on Christmas Eve.  My dad had been totally bedridden for a few days prior to this but he recognized each one of us and greeted us by name.  The majority of the time he slept but if he was awake his eyes would light up and he would smile whenever anyone came into his room.

He was so thankful for everything and he radiated gentleness and peace.  A few weeks before my sister had sent me the following sms:

“Dad is so stoical and gracious and I am learning so much from him about acceptance and letting go and being grateful and trusting God”.

That night we held a carol service in his room and the next morning we held our Christmas service and opened presents around his bed.

Two days before he died, as three of us were sitting around his bed, he  opened his eyes and said

“It’s time to say goodbye now. I am going to be with the Lord . The Lord is waiting for me”.

We called everyone into his room and as each grandchild hugged him, he told them that he loved them and gave them a blessing.  As my husband bent to hug him my dad thanked him for being such a good son-in-law to him.

On the morning of his death he repeated a few times “I am going home” and then at one o’clock that afternoon he finally went home.

‘Precious in the sight of the Lord is the death of his saints’
Psalm 116:15 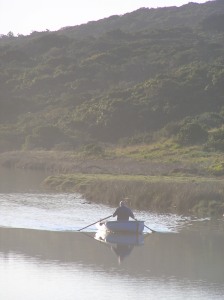 I am a child of God's. I am also a writer. Mother Teresa once said "I am a little pencil in the hand of a writing God who is sending a love letter to the world". My objective is to be one of God's love letters to the world. I can only achieve this through His grace at work in my life.
View all posts by Noelene →
This entry was posted in Death, Fathers, God and tagged Children, faith, grace, Parenthood, thankfulness. Bookmark the permalink.

13 Responses to HOW GREAT IS OUR GOD!