ONE OF THE MANY PERKS TO BEING A CHRISTIAN!

Being a part of the family of God is definitely one of the biggest perks to being a Christian!

As a member of God’s family, one can travel anywhere in the world and be assured of meeting other members of the same family.

“Consequently, you are no longer foreigners and strangers, but fellow citizens with God’s people and also members of his household”  Ephesians 2:19

In the two photos above the following countries are represented:

We are all drawn together because we love the Lord!

We had gathered in Cape Town, South Africa, to honor and celebrate American Independence Day on the 4th of July!  We wanted to share this celebration with our folks in church who were from the United States, William D. Carter III a visiting student from Princeton Theological Seminary and Andy Cunigan, a fellow American. Andy and his family are living in South Africa for a while and, ironically, his wife Betsy and their three children were on holiday in the States and were celebrating the ‘real deal’! As Believers our cultures and traditions can be shared and celebrated with everyone and we can learn so much from each other.

The American flag was ‘flying’, there were copies of the Declaration of Independence and the words to “The Star-Spangled Banner” on the table, hamburgers and hot dogs were served and the piece de resistance was a cake baked and iced as the American flag by the youngest member present! 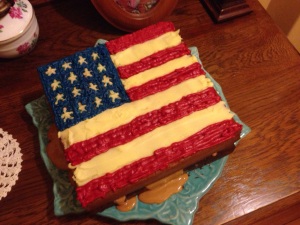 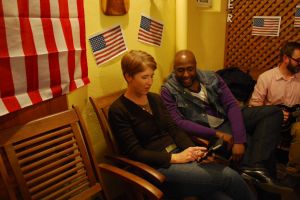 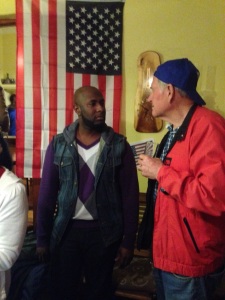 After supper the mandolin and guitar were brought out and the singing began!

As I sat there, I imagined what it must have been like when Jesus was on earth.  How he must have enjoyed his evenings – eating, laughing, talking, praying and singing praise songs to God, and how much He must have enjoyed celebrating the 4th of July with us!

Romans 12:5 “so in Christ we who are many form one body, and each member belongs to all the others”

I am a child of God's. I am also a writer. Mother Teresa once said "I am a little pencil in the hand of a writing God who is sending a love letter to the world". My objective is to be one of God's love letters to the world. I can only achieve this through His grace at work in my life.
View all posts by Noelene →
This entry was posted in Family, God, Uncategorized and tagged faith, fourth of July, Love, Relationships. Bookmark the permalink.

3 Responses to ONE OF THE MANY PERKS TO BEING A CHRISTIAN!