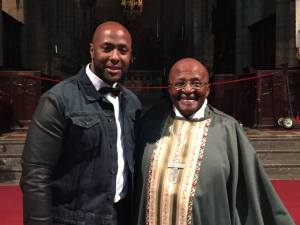 We have a visiting student from Princeton Theological Seminary, United States, who is doing an internship at our church, Mowbray Presbyterian Church, for eleven weeks.

His name is William D. Carter III, and we are really glad that God sent him to South Africa!

He preached for the first time in our church on the 31st May on the topic of  ‘Spontaneous Worship’. He was smartly dressed in a suit and bow tie and his style of dress has set a good example for our youth.  During his sermon he burst into song, ‘This little light of mine, I’m gonna let it shine’, and soon had the whole congregation singing and clapping along.  I speak under correction, but as far as I know, this was the first time in the history of the church that a visiting pastor burst into song in the middle of his sermon.  It was great and added so much to the context of his sermon.

This past Sunday, William did the All Age talk.

He recounted that when he was a child he loved to watch cartoons.  Superman was his hero and he longed to meet him.  Then came Batman and he also wished he could have met him.  As he grew older he learnt about Nelson Mandela in South Africa and longed to be able to meet him.  Nelson Mandela was imprisoned for 27 years by the South African apartheid government. His only ‘crime’ was wanting equal rights for all races in South Africa.  He was released from prison in 1990 and spearheaded the abolition of apartheid. In 1994 he became South Africa’s first black president.

William would also love to meet the present president of the United States, Barack Obama.  Sadly, that has not happened yet.

There was another man he longed to meet and that was the Archbishop (Emeritus) of Cape Town, Desmond Tutu.  Desmond Tutu was awarded the Nobel Peace Prize in 1984 for his efforts in resolving and ending apartheid.

On June 12th, William attended a service at the St George’s Cathedral in Cape Town.  As he describes it, he sat next to a lady who started chatting to him.  She asked him whether he would like to read the scripture before the service.  He said sure and then looked up and saw Bishop Tutu.  In his words:

This morning I had the distinct privilege to read scripture at St. George’s Cathedral, Cape Town in a service lead by Bishop Desmond Tutu. I am humbled by my experiences!

Afterwards, he got to meet Bishop Tutu and shake hands with him.  He stated, in jest, that he had not washed his hand since!  He also had the privilege of having his photograph taken with the Arch Bishop.

William said that as he stood there, the following verse kept going through his mind

“For I know the plans I have for you’, declares the Lord, “plans to prosper you and not to harm you, plans to give you hope and a future.” Jeremiah 29:11

And it struck him, how awesome our God is.  That God had fulfilled one of his heart’s desires of being able to meet a man  he had long admired and wanted to meet.  Not just to meet him, but to be given the privilege of doing the scripture reading in the service, of shaking hands with this man and then, as a bonus, God threw in a photo of the two of them together!

“Delight yourself in the Lord and He will give you the desires of your heart.  Commit your way to the Lord, trust in Him and He will do this”. (Psalm 37:4)

God has given that promise to each and every one of us – if we delight ourselves in Him, He will give us our heart’s desires.

“God’s dream is that you and I and all of us will realize that we are family, that we are made for togetherness, for goodness, and for compassion”  – Archbishop Desmond Tutu

I am a child of God's. I am also a writer. Mother Teresa once said "I am a little pencil in the hand of a writing God who is sending a love letter to the world". My objective is to be one of God's love letters to the world. I can only achieve this through His grace at work in my life.
View all posts by Noelene →
This entry was posted in God, Life, Promises and tagged Archbishop Desmond Tutu, gifts, grace, thankfulness. Bookmark the permalink.