GOD DOES NOT CALL THE QUALIFIED, HE QUALIFIES THE CALLED 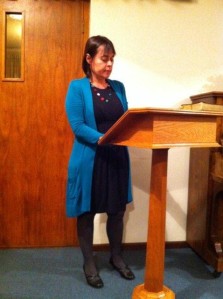 The author Henri Nouwen wrote:  “Over the years, I have come to realise that the greatest trap in our life is not success, popularity, or power, but self-rejection”.

Self-rejection takes the form of that little voice in our heads that the majority of us hear quite often: “Who do you think you are?” “You aren’t capable of doing that” “You are so conceited, there are people far more qualified who can do that”

Self-rejection is also a form of fear.  Fear of accepting ourselves for who we are. We often don’t attempt something because of fear of failure.

Franklin D. Roosevelt said:  “The only thing we have to fear is fear itself.”

A vast majority of us are not living the lives that God ordained for us because of fear.  Fear of failure and fear that if we do take God at His word and trust Him to fulfill our heart’s desires, He will fail us.

Rosa Parks, the civil rights activist said:  “I have learned over the years that when one’s mind is made up, this diminishes fear; knowing what must be done does away with fear.”

Before this fear can be diminished, however, we have to first identify and recognize exactly what the fear is.  If you wake up in the morning with an anxious knot inside your stomach at the thought of having to face yet another day, you need to pray and ask God why you feel that way and what exactly it is that you fear.

God treats each one of us in the same way.  His love and forgiveness is overwhelming.  When we are overcome by our own sins, mistakes, fears, hurts, God longs to comfort us and care for us and through the death and resurrection of His Son He has made a way for us to be reconciled to Him.  We don’t have to wallow in self-pity when we feel we have blown it, failed or sinned against Him – all we need to do is to ask for forgiveness, to take some time out, pray to Him, sleep, eat, rest and then wait for Him to speak to us. God “does not treat us as our sins deserve or repay us according to our iniquities”. Our God is “compassionate and gracious, slow to anger, abounding in love.”

God has given us the most amazing weapons to combat the fears we have – the Bible and prayer!  He has also given us each other.

The title of this blog is based on  Ephesians 2:8-10: “For it is by grace you have been saved, through faith – and this not from yourselves, it is the gift of God – not by works, so that no one can boast.  For we are God’s workmanship, created in Christ Jesus to do good works, which God prepared in advance for us to do”

My second book, All God’s Stones, is due to be released towards the end of March and this book was written despite that voice in my heard repeating over and over again “Who do you think you are to write a Christian book?  You are not worthy of writing a book!”

I constantly repeat these words to myself “Despite what I may feel, I have God’s anointing on my life.  His grace covers my inadequacies. I am God’s workmanship and He will equip me to do the work He has planned in advance for me to do”.

Solly Ozrovech once said:  “The realization that the living Christ is at work in your life should give you respect for yourself – not in the sense of foolish pride, but with thanksgiving through Jesus Christ that you are a child of God.  Stop disparaging yourself and remember that the master needs you so that His glory may be reflected through you”

One of my biggest fears is public speaking.  I have subsequently learnt that this fear is known as glossophobia and that according to the Wall Street Journal, public speaking is the number one fear in America.  Believe it or not, the fear of death is ranked as number two!

A few years ago it was prophesied over my life that God would use me as a public speaker.   You have no idea what dread struck my heart when I received that prophesy! I actually checked behind me to see if the person wasn’t speaking to someone else.

I have subsequently come to realise that I can do all things through Christ who strengthens me.  I also trust that when I mess up He will be able to fix it.  He will never allow me to embarrass myself or be humiliated when I am doing what He has called me to do.

My life is a testimony to God’s grace, His healing and forgiveness and I am proof that if we submit ourselves to Him, He is quite capable of equipping us and using us wherever He places us.

I overcome my fear of public speaking by spending time in prayer and meditating on His word. By practicing in front of a mirror what I am going to say and by giving the talk to my family. In fact, before one of my talks, one of our daughters very dryly commented:  “You don’t have to worry if you get run over on the way to the venue because any one of us will be able to  give the talk for you!”  She had had to listen to it so many times she knew it off by heart!

I also send a SOS prayer request out to a group of people asking them to keep me in their prayers.

It is through God’s grace that I can stand before an audience and speak, and if He can use me to speak in public, He can use anyone to do so much more. He does not call the qualified, but He definitely qualifies and equips the called!

My prayer for each one of us is that we will  recognize and face our fears, and start to live the lives God has qualified us for.

I am a child of God's. I am also a writer. Mother Teresa once said "I am a little pencil in the hand of a writing God who is sending a love letter to the world". My objective is to be one of God's love letters to the world. I can only achieve this through His grace at work in my life.
View all posts by Noelene →
This entry was posted in God, Life, Promises, Prophesy and tagged grace, prayer, self-worth, wholeness. Bookmark the permalink.

1 Response to GOD DOES NOT CALL THE QUALIFIED, HE QUALIFIES THE CALLED