DEATH AS A GIFT 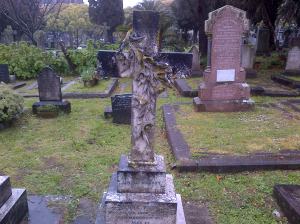 During this Christmas period my family and I took a drive one night to go and look at the Christmas lights in the main street in Cape Town. As we were driving along, the conversation turned to these horrific statistics. Imagine 1 184 people dying in one month on a country’s roads.  It works out to more than 38 people on average, dying needlessly, every day.

Our one daughter commented “If we were to be involved in an accident tonight I hope that we all die and not just one or two of us.  I want us to go together as a family”.

Another daughter replied “If that happens, God will be getting five amazing gifts!”

For a moment I didn’t understand what she meant and then it struck me.  That if we, as a family, died tonight God would be receiving “five amazing gifts” in the form of us that evening.

I have never heard death described like that before.

That if a believer dies, he arrives in Heaven as a present, with people waiting in anticipation to receive him as a gift – people who have gone before, as well as God Himself.

Over the years, as I have spent more time reading His Word, more time in prayer, more time in just ‘sitting’ before Him, I have come to the realization that “Yes”, I would still be able to say all those things once I had finished crying and wailing and asking God “Why?”.  I am not sure how long that period would last, but I do know that eventually I will come to a place that I will once again be able to praise God and find peace in my soul.

The words that He has given us in John 14:27 are not idle words.

“Peace I leave with you; my peace I give you.  I do not give to you as the world gives.  Do not let your hearts be troubled and do not be afraid.”

I have sat beside two Believers as they have breathed their last breaths.  The one was my oldest and best friend, Zorena.  She died at the age of 34, leaving three young sons behind.  The youngest son was only four months old.

The other person was my mother who had been ill and died at the age of 82.

Neither of them were able to talk before dying but Zorena’s eyes were shining and she was smiling right up until she died.  My mom had smiled at us in the morning, her face also radiating peace and then she closed her eyes and died a few hours later.  I sat by both their bedsides for a long time afterwards and imagined the welcome they were receiving in Heaven from friends and family who had gone before.

They too, were amazing gifts that God was receiving in Heaven!

Our minister once recounted what a staff member at a Retirement Home once told him about one of his elderly congregants. She told him that as she was passing this lady’s room one afternoon, the door was open and the lady was dancing in her room with arms lifted.  She saw the staff member and called her into the room and said “Come dance with me now because tomorrow I will be dancing with the angels”.

The next morning when the staff member went into the room she discovered that the lady had died in her sleep.

She was dancing with the angels.

God’s gift in turn to us, besides our earthly lives, is the gift of eternal life.

I am a child of God's. I am also a writer. Mother Teresa once said "I am a little pencil in the hand of a writing God who is sending a love letter to the world". My objective is to be one of God's love letters to the world. I can only achieve this through His grace at work in my life.
View all posts by Noelene →
This entry was posted in God, Life, Promises and tagged Death, heaven, life. Bookmark the permalink.